Bayhorse Silver Inc, (The “Company” or “Bayhorse”) TSX-V: BHS reports on operations at its 100% controlled Bayhorse Silver Mine (the “Mine”), Oregon, USA.

On September 24, 2018 the Company issued a news release on a National Instrument (NI)-43-101 Maiden Inferred Mineral Resource for its 100% controlled Bayhorse Silver Mine, Oregon, USA. The maiden resource is comprised of 292,300 short tons at an average grade of 21.65 (673.4 g/t) troy ounces per ton (opt) silver (Ag) for total contained silver of 6,328,400 ounces*. The mineralized material contains significant amounts of copper (Cu) and zinc (Zn), however the historic data utilized in the mineral resource estimate did not allow for a reliable estimation of Cu and Zn grades.

As at the end of October, 2018, Bayhorse reports it has expended a total of US$6,100,000 dollars on rehabilitation and new development at the mine along with the excavation of over 1,100 feet of underground haulage-ways and drifts. A secondary escape-way has been established and the necessary underground services (ventilation, water and air lines) have been installed The Company has also completed the installation of a primary crushing circuit and the Steinert Ore-Sorter. The Company’s independent geological consultants have completed an initial phase of geological modelling resulting in the estimation of an NI-43-101 inferred mineral resource of 6,328,400 oz/Ag.*

The Company has established an all-weather storage pad outside the main portal, and is ready to erect a cover over the pad to ensure any mineralized material stored outside the Mine for processing through the Company’s Steinert Ore-Sorter, will not be affected by winter conditions, such as snow and ice.

Since reopening the western end of the underground workings the Company has inspected and rehabilitated a number of the historic slusher drifts that were installed by Silver King Mines in the 1980’in preparation for mining the western zone of the deposit, much of which is unmined. The historical western most workings comprise a horizontal distance of about 320 feet (~95 m) from the western end of Big Dog Zone. The mineralization is flat lying to shallow south dipping above the main historic haulage-way for approximately 30 – 40 feet. To the north, the mineralization then appears to incline upward toward the north at approximately 45 to 70 degrees for another 60-70 feet for a total horizontal across strike width of approximately 100 feet. The southern end of the flat lying area of mineralization appears to dip to the south. An underground drilling program is proposed to test the north and south extensions to the mineralization. 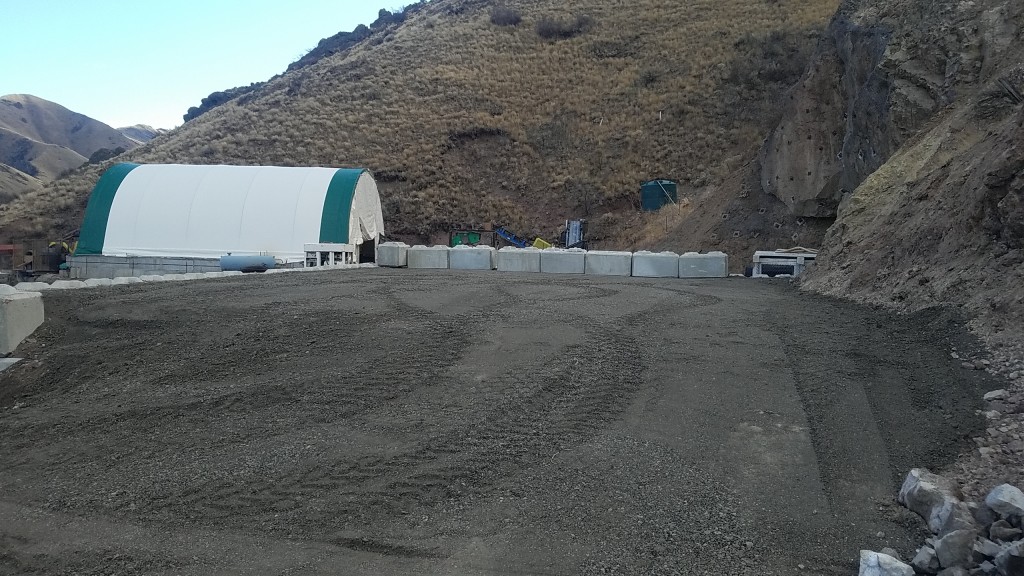 Samples taken from the extracted material have been submitted for assay and assays are pending.

The Bayhorse silver mineralization comprises mainly tetrahedrite-tennantite, that is the main copper-silver mineral and, including the other metallic minerals, such as chalcopyrite, sphalerite, galena and pyrite will be concentrated and upgraded into a dry concentrate through the use of the Steinert ore-sorter.A sampling protocol is being instituted along with QAQC inserted samples to determine ongoing head grades of the material being bulk sampled and processed through the Ore-Sorter and gravity separation for the fines.

No economic evaluations have been completed on the Bayhorse silver deposit, and as a result a formal lower cut-off for the mineralized zone has not been established. However, for the purposes of reporting the Project’s inferred mineral resource, the Company’s geological consultants, APEX Geoscience Ltd., utilized a lower silver cut-off grade corresponding to 7.5 opt Ag, which was based upon a conceptual overall mining and processing cost of approximately $US100 per ton, a silver price of US$15/ounce at the current US$/C$ Exchange rate of 0.7624/1.3117 and an assumed recovery of 90% for the mineralized material. Furthermore, based upon the consultant’s collective experience and site visits to the Project, the qualified persons (QPs) for the maiden inferred mineral resource concluded that the deposit has “reasonable prospects for eventual economic extraction”.

The Company advises it is not basing any decision to produce silver and other metals on a feasibility study of mineral reserves demonstrating economic and technical viability and also advises there is increased uncertainty and specific economic and technical risks of failure with any production decision that is not based upon a feasibility study. These risks include drop in price of commodities produced, namely silver, copper, lead, and zinc, from the pricing used to make the production decision, failure of the grades of the produced material to fall within the parameters used to make the production decision, and changes in mining costs due to changes within the mine during development and potential future mining. There are also metallurgical recovery changes that cannot be anticipated at the time of production.

Bayhorse Silver Inc., a junior exploration company, has earned 100% interest in the historic Bayhorse Silver Mine, Oregon, USA. The Company has an experienced management and technical team with extensive exploration and mining expertise.