Bayhorse Silver Inc. (“Bayhorse” or the “Company”) (TSX-V: BHS) has commenced a new diamond drilling program at its Bridging The Gap Silver Project that lies between the historic, formerly producing, Bunker Hill Mine, and Asarco’s formerly producing Page Mine.
Dynamic Drilling of Osburn, Idaho is the drill contractor, and West Valley Contracting of Cataldo, Idaho, is providing drill location access and support services. Access roads to the first drill pads on the Crown Point structure have been completed, drill pad access to the Wyoming/Curlew drill pads is underway, and the drill rig has been mobilized.

The first drill target is a pair of parallel silver /zinc/lead veins at the historic Crown Point Mine, and approximately 300 feet to the south, the parallel Shea structure. Historic Bunker Hill mining records report a 30 foot mineralized intersection was made in 1936 by an underground drill hole from the 200 foot level at the Crown Point workings into the parallel hanging wall Shea zone that was never followed up.

On completion of the Crown Point diamond drill holes, the drill rig will move to the western side of the Project and drill the Wyoming and Curlew Targets. Bayhorse’ earlier Bridging The Gap drilling enabled an understanding of the stratigraphy and structural geology and definitively identified the location at depth of the Osburn Fault. Mineralization in the district is related spatially to the Osburn fault and closely parallel structures. 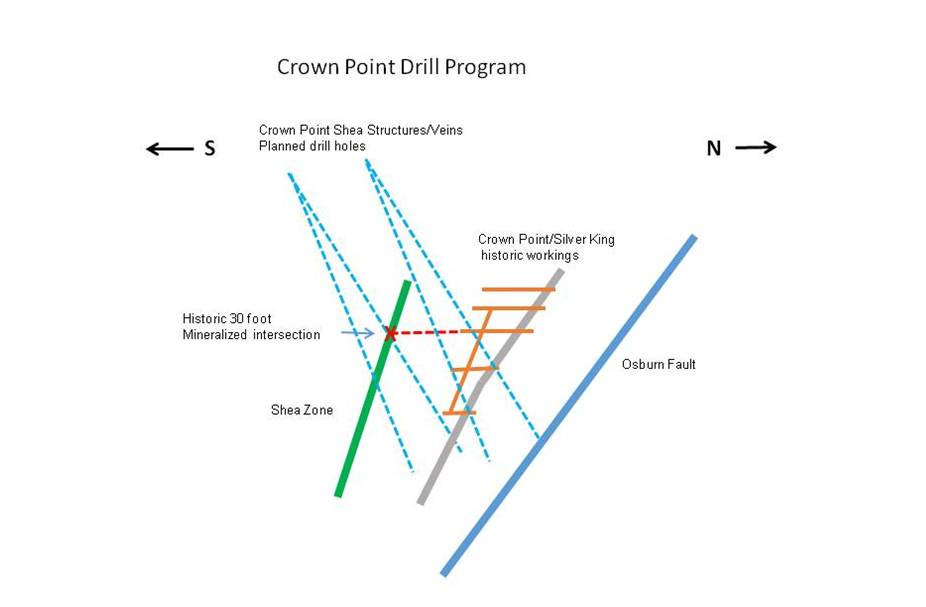 Bayhorse CEO Graeme O’Neill comments that “despite being sandwiched between two past producing mines, due to claim boundary issues between Bunker Hill Mining and ASARCO, and the subsequent transfer of the property to the EPA, the Bridging The Gap mines have remained unavailable for exploration and development for the past 76 years. We are very pleased to be heading our second round of exploration on the Project”. https://bayhorsesilver.com/government-gulch-silver-valley/

According to the U.S Bureau of Mines, production from the 6 mines on the Bridging the Gap Project, (Blackhawk, Wyoming, Ranger, Crown Point, Silver King and Curlew) for the period between 1886 – 1940 was over 2 million oz of silver, 9.4 million pounds of zinc and 6 million pounds of lead.

U.S Bureau of Mines (USBM) records show that Crown Point Mines historically worked on vein systems with reported in-situ grades of up to 80 opt Silver and 65% lead, from which 3,000 tons of ore was direct shipped at that grade. The Crown Point/Silver King Mines closed in 1940 with total production of 116,906 tons averaging 12 oz/ton silver and 11.3% lead(USBM).

Exploration potential for the Crown Point, Silver King, and Shea structures at depth is substantial. The Crown Point/Silver King zone was only mined down to the 200 level, but an exploration shaft extended the mineralized structure to 800 feet. The highly prolific Bunker Hill Mine immediately adjacent to the east was mined down to 5,800 feet, and the Page Mine, on the west side, was mined down to the 3,500 foot level. Hecla’s nearby “Lucky Friday” Mine is currently being extended to the 10,000 foot level.

Bayhorse Silver Inc. Bayhorse is also earning a 75% interest in the past producing Bridging the Gap Project, consisting of ASARCO’s historic Crown Point, Silver King, Ranger, Wyoming, Curlew, and Blackhawk silver/lead/zinc mines in Idaho’s Silver Valley.
Bayhorse own an 80% interest in the historic Bayhorse Silver Mine, Oregon, USA, as a result of earning into the project from current underground and construction of concentrating facilities.
The Company has an experienced management and technical team with extensive exploration and mining expertise.