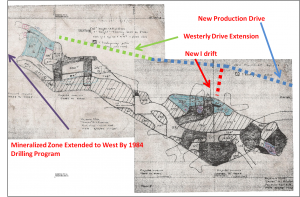 Big Dog Zone Workings
The new production haulage way being developed is to ensure more than one mineralized heading can be mined at the same time from the Big Dog, and to increase the mining capacity from the current 100 tons per day to over 200 tons. 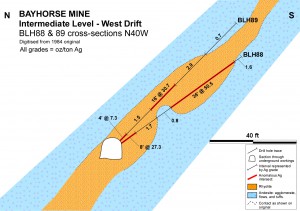 Historic drill intersection
In 1984, drilling intersected significant grades of silver bearing mineralization and extended the mineralization over 150 feet past the historic Big Dog, but no tonnages were assigned to the area drilled. 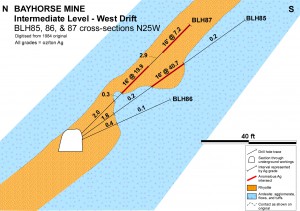 Historic drill intersection
Historically, in the Big Dog zone, Silver King reportedly blocked out 1,800 tons using a 6 oz/t cut off grade ready for mining when they stopped production in 1984 due to low silver prices.

The new main production haulageway is being extended to the west to this drilled out zone, that forms part of the suggested potential Exploration Target of between 500,000 and 1,000,000 tonnes grading between 17-20 ounces silver per ton.

Mineralized ground has been intersected in both the new haulageway and crosscut I drift to the north of the historic Big Dog workings. As well, the new crosscut I-Drift has intersected one of the large areas that Silver King , “Blocked Out” in late 1984- ready to mine.
This potential exploration target is conceptual in nature, there has been insufficient exploration to define a mineral resource and it is uncertain if further exploration will result in the target being delineated as a mineral resource.

The Company has completed installation of, and is currently testing, the ball-mill to process the fines created by blasting and mining that are too small to be sorted through the ore-sorter. The Company anticipates that gravity upgrading the 800 plus tons of fines accumulated since the commencement of mining at the beginning of the 2018 will commence in the 2nd week of May, 2018.

Bayhorse CEO Graeme O’Neill emphasizes that “The Bayhorse mine operation is a multi-faceted mine/mill/concentration operation designed to produce high-grade shipping material on site in a cost effective manner.” ” Moving forward on many fronts simultaneously – re-opening a historic silver rich mine, installing and optimizing the x-ray transmissive ore sorter, the fines ball mill, and installing larger capacity haulageways to increase the current 100 tons/day production rate has been completed. While we have had some delays, as is normal in any start up mining operation, we believe the majority of mine reopening challenges are behind us and according to goldsilver.com the opportunities in silver are just ahead.

The Company has granted 500,000 Incentive Stock Options exercisable for five years at $0.20 to consultants, management and employees.
This press release has been prepared by, prepared under the supervision of, or has been approved by Dr. Stewart Jackson, P.Geo. , a Qualified Person under National Instrument 43-101. He is a technical advisor to the Company and holds incentive stock options in the Company.